French is a fun, easy to learn romance language that is used all over the globe. With more than 100 million speakers worldwide, learning French as a second language can not only bridge travel opportunities but open career doors. Delve into why learning French can be important and how it compares to Spanish.

Knowing a second language like French can open up opportunities in the global market in your career. Not only will it make you an ideal candidate to travel to French-speaking countries, but French could be the language to know in the coming future. A Forbes article suggests that French could be spoken more than Mandarin and English by 2050. It is currently spoken by about 300 million people around the globe. Additionally, French is listed among one of the top majors to complete in college according to the Daily Beast. Therefore, being multilingual could definitely open up several job opportunities.

Knowing French Is a Bridge to Travel Opportunities

French isn't just spoken in France. It's spoken all over the world. Not only can you find French used in Canada and Belgium but it's a major language spoken in Africa. For places like Chad, Democratic Republic of Congo, Haiti, Niger and many more, French is the official language. This could mean that knowing French can open up travel opportunities to places that you might never have imagined. Not only can you explore the city of love, but you could converse with those in the Sahara as well.

Learning a language isn't just about the language itself. It's about the French culture that goes with it. When you join a French class, you explore the French foods, customs, holidays, etc. that are different than America. Not only that but you gain an understanding of the history of the language and its roots. The further that you delve into the language, the more you'll see how it has changed and morphed, along with how different cultures using the French language vary. For instance, like British English is different from American English, African French can be different from standard French. Diving into both and learning the difference is not only a cultural journey, it is a language exploration.

French Is Easy to Learn

As far as languages go, French is pretty easy for English speakers to learn. This is because French and English use the same alphabet and many words share similar form and meaning. According to MOSAlingu, French and English share 27% of their words and 45% of English words have a French origin. Additionally, Babble Online Languages points out that the sentence structures of the French language are more simple making it easier for English speakers to pick up. 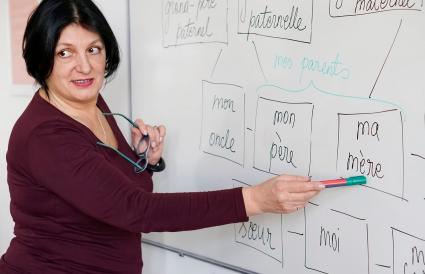 French Is a Gateway Language

Since French is one of the romance languages, once you understand the rules for speaking and reading French, it can actually make it easier to learn other languages like Portuguese or Spanish, according to Babble. Therefore, you can use this second language as a stepping-stone to learning other languages with similar conjugation and tenses. Getting the structure down and having that lightbulb moment where it all starts to click with French can get you well on your way to learning a third or even fourth language.

You want to enhance your brain and really work those neurons, forget crossword puzzles and think about learning French. Not only can it give your creative thinking a huge boost, but it is works to slow brain aging.

Creativity is abound with creative thinkers like Cezanne, Monet and Manet, to name a few. But there is real research behind the fact that knowing a second language like French can make you more creative. A study on The Effects of Foreign Language Learning on Creativity showed that those that knew a second language scored higher on the Torrance Test of Creativity in all four thinking abilities. You might not become the next Renoir, but knowing French can help you to see the world in a whole new creative way.

As you get older, your brain is going to age. Nothing works like it used too. But learning French can not only increase the size of your brain, according to a study by Swedish scientists, it can slow brain aging. A research study by the University of Edinburgh showed that speaking more than one language like English and French can have strong effects on your cognitive abilities as you age. So if you think you're too old to learn French, think again. It's actually really good for your brain.

Is French Easier to Learn Than Spanish?

Both French and Spanish have their positive points. However, whether one is easier to learn than the other comes down to interest and personal preference. There are a few areas of French that are somewhat easier than Spanish. Fluent in Three Months breaks down where French learners might have an easier time.

French is a fascinating love language that offers an interesting and unique experience for second language learners. While there are several reasons that you should learn French, remember when you are considering learning a new language find the one that fascinates and excites you. This will be the language that will really draw you in. Hopefully, c'est francais.

1
Comments
© 2006-2021 LoveToKnow, Corp., except where otherwise noted. All Rights Reserved.
Reasons Why You Should Learn to Speak French