Mardi Gras was celebrated in Roman Catholic France centuries before the New World was discovered. The riotous parades and parties in New Orleans got their start as imports by French explorers who introduced a favorite annual custom to the raw social fabric of the colonial Gulf region. So, the French had it first, and they named it "Fat Tuesday" after the feasts revelers engaged in prior to beginning the fasting period of Lent.

Le Carnaval is the French term for what Americans call Mardi Gras. It's an enduring annual tradition throughout much of the European country - each celebration nurtures its own local character. French cities such as Nice, Dunkirk, Nantes, Paris, Ploermel, Annecy, Argenteuil, Lille, Limoux, Rennes, Cote d'Azur, Lyon and Marseille schedule everything from parades to masked balls to fish tosses to commemorate history, party down pagan-style and generally exhibit some classic French joie de vivre.

Pagans, Romans and One Fat Ruminant

Randy pagans cavorted through the streets of Rome during their Saturnalia or Lupercalia seasonal fertility rites - a widespread bacchanalia that dated back millennia. The disapproving Roman Catholic Church fathers, in their infinite probity, decided co-option was the wiser strategy.

A new Church-sanctioned tradition merged uninhibited carousing with Christian liturgical observation. The period of late-winter revelry migrated from Rome throughout Catholic countries Italy, Spain, Portugal and France. By medieval times, pagan partying had transitioned into a multi-day blowout preceding Lent, the 40 days of penance and austerity, fish and fasting beginning on Ash Wednesday and leading up to Easter.

Origin of the Name Mardi Gras

Carnival or le Carnaval (carne levarium) was when the last of the meat was consumed. The fatted calf of the Romans, once paraded before the guests before it was cooked and served, is now a symbolic Boeuf Gras, often a bull or an ox that is part of the festivities. On Mardi Gras, the Fat Tuesday on the eve of the Lenten fasting, a lack of refrigeration meant that all the household's meat, eggs, milk and cheese had to be consumed in a final feast.

The French Twist on Mardi Gras

Dig into the language of Mardi Gras and you'll uncover the traces of the festival's origins. France did not invent Mardi Gras, but like all things indelibly stamped French, the country styled the trendy party in its own image. Mardi Gras is celebrated in France with parades, fancy mask and costume making, festive feasts and indulging in decadent pastries. These celebrations have occured since medieval times and show no sign of stopping. 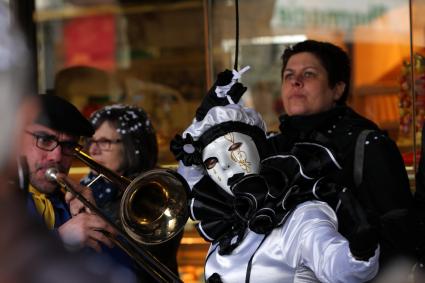 Carnival of Limoux in France, the longest carnival of the world.

In Paris and at court, that was a glittering royal image, complete with fancy dress balls. The rest of the country was less bejeweled but no less enthusiastic. Towns and villages were organized around their churches and the old pagan spring celebrations, once merged with the newer religious tradition, involved communities in increasingly elaborate social activities.

Today's Courir de Mardi Gras, a borrowed Louisiana ritual, comes from the French peasant "runs" or parades from estate house to estate house in search of food alms. By mid-winter, France's rural poor were hungry and the begging runs were an accepted part of life. As they became rowdier and more ritualized, some revellers donned masks to avoid identification. Others costumed themselves in makeshift rags to perform spoofs and satires about the wealthy - a favorite prop was a tall pointed capuchon or French noblewoman's hat, a source of merriment and derision.

The echoes of all these early French customs have survived the centuries and gone global. So has the language. The words are magic conjurers:

The misty beginnings of Mardi Gras fold all these medieval party terms into a timeline that leads straight to "Laissez les bons temps rouler" ("let the good times roll") in France and elsewhere today.

Paris has no lock on French Mardi Gras celebrations. The fun can be found in other major cities of France.

In fact, the most famous French blowout is in the Mediterranean port city of Nice. The no-holds-barred festivities that take place today are steeped in tradition, from the Carnival mentioned in 1294 by Charles of Anjou, Count of Provence and King of Sicily, to the present day 16-float Flower Parade on the famous seaside Promenade des Anglais - an indulgence of thousands of locally grown fresh-picked blooms. The Flower Parade dates from 1876 and shares top billing with the burning of the mock festival king, the fireworks over the Bay of Angels, and two solid weeks of Riviera revelry.

The Paris fete for Mardi Gras, a months-long staple from the Middle Ages to 1952, took a 45-year hiatus but was revived in 1997. Today, it is an all-day parade with a twist - a beignet twist from the local patisseries, to be precise.

Master chefs produce every kind of French donut imaginable, from every region of France: bugnes, oreillettes, roussette, merveille, bottereau, tourtisseau and more. The rich pastries are consumed on this last day of butter, cream and egg feasting before the deprivation of the Lent fast. If you're not fasting, just enjoy the parade and stuff yourself, with the promise to do a penitent run along the Seine the next day

Dunkirk's revels last from January to March, culminating in the 3-day Trois Joyeuses street dances and parades preceding Ash Wednesday. The northern French seafaring city celebrates its heritage along with the season as revelers dress up in yellow oilskins, carry tall colorful umbrellas, watch parades with local bands and huge puppets - some dating to the 1800s - and line up under the belfry balcony of Town Hall on Fat Tuesday for the Mayor's raucous herring throw.

Dunkirk's Mardi Gras began in the 17th century as a feast before the men of the town departed for the dangerous annual 6-month cod-fishing expeditions. Like all good repeat parties, this one evolved into an elaborate ritual merging old and new customs and is a distinctly Visschersbende-flavored (band of fishermen) bash today.

Carnival, the hedonistic excess of Fat Tuesday, was always too fabulous to contain in France, where mad love for the festival is legend. But the French, unconcerned about the boisterous foreign interpretations of their little feast before the fast, keep on doing their thing. Wherever you visit in France during Mardi Gras season, be assured there is a chance to celebrate life with pageantry, processions and pastry before Christian sobriety reasserts itself until Easter.

3
Comments
© 2006-2021 LoveToKnow, Corp., except where otherwise noted. All Rights Reserved.
Why Is Mardi Gras Celebrated in France?