When you need to translate something quickly, there are several online tools that can make the job almost painless. It stands to note though, that the longer your passage for translation is, the harder it is to get an accurate translation via an Internet tool. For short sentences though, an online translator is generally able to get the gist of the sentence.

Google Translate is perhaps one of the easiest and quickest ways to get your sentence translated fairly accurately. The interface is very easy to work with. Simply enter a sentence (or web address) on the left and on the right you get a full translation.

Another nifty feature is that you are allowed to select phrases and words of your translation, and Google Translate will give you alternate translations. This is great if you have a feeling that what you're getting isn't quite right.

Google Translate also tends to be one of the more accurate translators of this nature online, in part because the site offers a feature that allows the community to suggest a different translation of a phrase. This makes Google much more intuitive in terms of picking up idiomatic expressions and nuances of language that other online translators are missing.

Bing Translator definitely lacks the intuitiveness that makes Google Translate accurate. It is worth mentioning only because if you were used to using Yahoo's Babelfish, you are now directed here instead. It works similarly to Google Translate in that you type a phrase into the left and out pops the phrase in your desired language, on the right.

Be forewarned, however, that the tool lacks any kind of 'intelligence' to understand what you mean. It does translations word for word which means that you may well miss the nuance of the phrase, or worse, get the phrase wrong. For example, if you type in the sentence, 'My name is Jeff,' hoping to the French sentence on the right, the search results yield 'Mon nom est Jeff,' rather than the correct phrase which is, "Je m'appelle Jeff."

This tool seems to be lacking in the grand scale vocabulary that other tools have and thus, is only minimally useful. With that said, it can make a handy dictionary if you are looking up only one word. 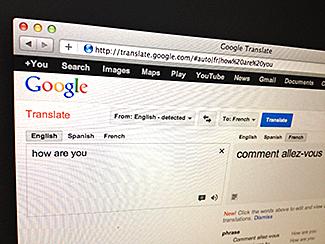 World Lingo is yet another translation option for a few sentences. It lacks bells and whistles, but one nice feature is that if you find you need more than just a phrase or two translated, you can hire a professional translator straight from the site. Another nice feature that is absent from a lot of translators is that there is a drop down menu for the various French accents should you want to type one in to make your meaning more clear.

Reverso is so named because it easily translates in either direction (from French to English or English to French). In addition, it has some fun features that make it a good choice for looking up a phrase or sentence here or there. Features include:

In addition, if you are looking to really work through your translation, there is a free conjugator, grammar tutorial and dictionary.

Collins Dictionary is incredibly well-known among linguists as being one of the best dictionaries available. It's not a surprise then that the website is one of the better phrase translators. There are no extras at all, but the dictionary is linked through the alphabet underneath the translation box. This is especially handy if you are unfamiliar with a word and want to look up its meaning, or if you need to look up a spelling to get the proper translation.

Translation at Your Fingertips

While you definitely have to be careful that what you're using is not being translated word for word but rather intuitively, there is no doubt that there are plenty of options available online. Choose your favorite translation tool and use it on your mobile device for on-the-go help when you need it.