Translation of Merry Christmas in French

The most general translation of Merry Christmas is Joyeux Noël. If you break the two words down and analyze each one, you will better understand the translated phrase, which will enable you to remember it more easily as well.

Joyeux is an adjective that means happy, joyous, merry or gay. Because it most closely resembles 'joyous' in English, many students of French prefer to think of the translation as 'Joyous Christmas' as a kind of memory aid to trigger the French adjective 'joyeux'.

Noël is simply the French translation of Christmas. Perhaps the Christmas carol, The First Noël, can trigger your memory that this is the French word for 'Christmas'. Historically, the names Noël or Noëlle were given to babies who were born on Christmas Day, but nowadays parents use the name freely.

Writing down the translation of 'Merry Christmas' in French is easy as long as you remember how to spell 'joyeux' and remember the accent on the 'e' in Noël. However, for many students, pronouncing this phrase can present significant challenges. 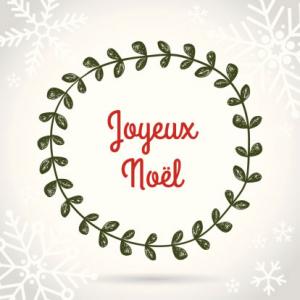 If you would like to remain non-denominational in wishing someone well, or encompass the entire holiday season instead of simply wishing someone a Merry Christmas, the following phrases may prove useful:

Meilleurs vœux: Directly translated, this phrase means 'best wishes'. It is a shortened version which usually means something along the lines of: my (or our) best wishes to you (and yours). This phrase can be used all throughout the holiday season especially, although it is also used on other festive occasions because of its all-encompassing nature.

While France is a traditionally Catholic country, modern France certainly has plenty of other religions, as well as citizens who do not practice any religion. As in much of the world, a movement is taking place that slowly replaces many instances where one might say 'Merry Christmas' with more general phrases, such as 'Happy Holidays'. In order to make this judgment call, simply think about the person or people to whom you are speaking. If you know the person extremely well (if you consider them a friend), then it is always safe to name a holiday explicitly because you know their religious affiliation.

Wishing somebody a Merry Christmas in France is, in the vast majority of interactions with strangers, acceptable. However, it's always a good idea to follow the lead of the person with whom you are speaking. For example, if you are in a shop or a restaurant during the holiday season and someone wishes you a Merry Christmas, you can easily reciprocate the festive wish.

If you are in doubt about your interactions in France, read about French Christmas traditions and French social customs. Of course, wishing your friends and family at home a Merry Christmas in French can be a fun new way to spread the joy of the season!