The Eiffel Tower was never meant to be a permanent part of Paris. In fact, the metal structure was not well-liked or appreciated by the French when it was constructed. With an intriguing history, it has since become a permanent symbol of the city and one of the most famous French monuments.

The original purpose of the Tower was to welcome global visitors to the City of Lights.

1889: Built as the entrance arch to the World's Fair, the Eiffel Tower was originally intended to stand for 20 years and then be taken down. The Tower was built by Gustave Eiffel, the engineer who also designed the inside of the Statue of Liberty. It this time, the Tower was considered a waste of money and space.

1889: French newspaper Le Figaro set up a printing press on the first floor of the Eiffel Tower. A visitor could purchase his daily newspaper and, for an additional fee, have the paper certified that he had climbed the Eiffel Tower.

The Eiffel Tower was home to some incredible discoveries as well as the subject of one of history's most notorious scams. 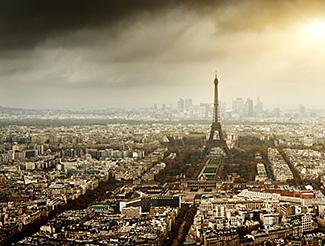 1909: The Count of Lambert successfully flew around the Eiffel Tower. While the feat marked a milestone in aviation history, the true benefit was that the aerodynamics lab on the first floor was able to test and observe how the wings functioned during flight.

1910: Father Theodor Wulf observed radiant energy from the top of the Tower. As a result of his experiments, he discovered cosmic rays. Since Wulf, the Eiffel Tower has played host to many scientific inquiries

1925: Victor Lustig is infamous for "selling" the Eiffel Tower - twice. Taking on the title of Deputy General of Mail and Telegraphs, he sent out letters to the top scrap metal dealers in Paris and convinced them that the highest bidder would get the Eiffel Tower and the right to tear it down. Out of the group, he chose the man that seemed most likely to buy the Eiffel Tower. That man received a contract while Lustig got a check. After waiting a month, Lustig did the same thing again, earning a cool $100,000 for his phony contract for the Eiffel Tower. Eventually, he was arrested for laundering counterfeit money.

1940: When the Germans entered Paris during World War II, the cables for the lift were cut, forcing Hitler to climb the Tower if he wanted to go to the top. Supposedly, the lift was impossible to repair because there were missing parts; however, it was repaired within hours of the liberation.

In more recent years, the Eiffel Tower has become both a place for celebration and mourning.

1957: A radio antenna was added to the top, increasing the structure's height by 65 feet.

2000: New Year's Eve was marked by the huge fireworks display of the Millennial Celebrations.

2009: The Eiffel Tower was named the third most popular place to commit suicide in Europe. In a 2012 newspaper article following a suicide, officials declined to comment on the number of suicides that have taken place, stating instead that "it is always too many."

Today, the Eiffel Tower continues to change with Paris and yet remains a standard icon to all that is French. The Tower boasts modern broadcasting equipment, a nightly light show, a café, and during the winter, an ice skating rink. Few can think of visiting Paris without going to the Eiffel Tower. It certainly has come a long way from its days as a temporary structure!