French literary masterpieces are often overflowing with romance. Many of these authors' quotable lines have made their way into English speakers' hearts over the years.

Marcel Proust (1871-1922) was, among other things, a novelist whose greatest contribution to literary history is À la recherche du temps perdu known in English as In Search of Lost Time or Remembrances of Things Past. He is also the source of many great quotations like this one from his novel, La Prisonnière (The Captive):

"We love only what we do not wholly possess." (Proust)

George Sand, born Amandine Aurore Lucile Dupin, and later known as the Baroness Dudevant, was a famous French novelist. She is well known for having defied convention by living apart from her husband, and for being Frédéric Chopin's lover. She is also remembered for dressing in men's clothes, thereby gaining access to places she wouldn't have been able to otherwise. Her most famous quote by far is from a Letter to Lina Calamatta:

"There is only one happiness in life, to love and be loved." (Sand)

Other famous French love quotes include:

"Nothing is real but dreams and love," from Le Cœur innombrable, IV, Chanson du temps opportun by Anna de Noailles

"In love, writing is dangerous, not to mention pointless," from Le Demi-Monde by Alexandre Dumas Fils

French songs have also provided many memorable quotes about love.

Je t'aime is probably the most famous love quote of all as it means I love you. It is also the title of one of the sexiest songs ever recorded in France or anywhere else; it was un succès de scandale when released in 1967.

A Belgian singer, one of Jacques Brel's most famous songs is Quand On N'a Que L'amour (If We Only Have Love). The song touches on the power of love to transform not only personal relationships, but also individual and societal experience: 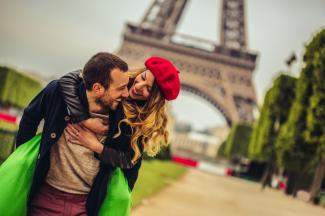 "If we only have love
We can forge a path
And create our own destiny
At each crossing."

Piaf, who led a life of suffering and passion, was the queen of French love songs. One of her most famous, La Vie en Rose, includes the following mots d'amour:

There are many more passages from this song, and others by Piaf, which speak of love.

While the following phrases cannot be attributed to a single writer, they have shaped conceptualizations of love in French and in other languages.

"In love, we forgive, but we never forget." (Unknown)

"If love is nothing but an illusion, then what is real? (Unknown)

Somehow, French writers seem to have a talent for capturing the essence of mankind's favorite emotion in words. For several centuries, the concept of love has been a focal point in French writing. Whether you read 19th century French poetry or Tristan et Iseut, you are bound to find some unparalleled phrases in French for expressing the sentiment of love.