Grasping the genders of different nouns is one of the more difficult concepts for beginning French students to master. Not only does the English language not have any concept of gender in words, but there are also many frequently used nouns in the French language that do not follow the typical patterns. Consequently, they simply must be memorized.

However, it is important to master the rules as well as the exceptions because agreement of gender in a sentence is fundamental to structuring the sentence correctly. In French, all adjectives agree with the nouns they are describing as do definite and indefinite articles.

Tip: Memorize the noun along with its article. This is much easier to do instead of memorizing the word and then trying to remember which gender it is. Most French lesson books present vocabulary in this way. 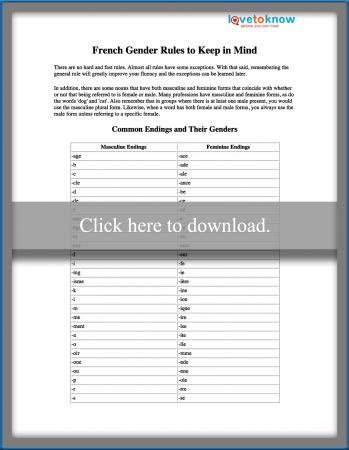 There are no hard and fast rules. Almost all rules have some exceptions. With that said, remembering the general rule will greatly improve your fluency and the exceptions can be learned later.

In addition, there are some nouns that have both masculine and feminine forms that coincide with whether or not that being referred to is female or male. Many professions have masculine and feminine forms, as do the words 'dog' and 'cat'. Also remember that in groups where there is at least one male present, you would use the masculine plural form. Likewise, when a word has both female and male forms, you always use the male form unless referring to a specific female.

If you need help downloading the printable French noun gender list above, check out these helpful tips.

Nouns Lists With Gender and Translation

Notice that the indefinite article is included to indicate gender (le is for masculine nouns and la is for feminine nouns). Note that for nouns that begin with vowels, or nouns that are plural, the gender is noted in parentheses after the word. (Example: l'eau, f.)

Remember, learning what gender a noun is will be easier if you learn the noun along with its definite or indefinite article. In addition, memorizing the common rules, as well as the exceptions, will make your job easier in the long run. While it might seem daunting at first, take a little bit at a time and before you know it, you'll be a pro.