France is home to some of the most iconic and well known landmarks in the world. From the Champs Élysées to the beaches in Normandy, France's historic wealth and aesthetic richness beckons tourists year-round. There are many famous places in France, not only within Paris but throughout the country as well.

To learn more about specific locations, click the "More Details" button on any of the following photographs.

Inside, visitors can view sculptures, paintings, and a treasury of holy relics.

With more than eight million visitors annually, the Louvre Museum is one of the most well-known art museums in the world. Located in Paris along the Right Bank of the Seine, the museum's collection includes one of the world's most celebrated paintings, the Mona Lisa. Visitors can peruse many historically significant objets d'art, including paintings, friezes, sculptures, and antiquities.

French monarchs lived in the Louvre palace, which opened as a museum one year after the end of France's monarchy in 1793. It has been a museum with a steadily growing collection ever since.

Arguably one of France's most famous monuments, the Eiffel Tower stands tall in Paris topping out at a height of 1,062 feet.

Built for France's 1889 World's Fair, the tower hosts more than seven million visitors annually. Visitors to the Eiffel Tower can enjoy panoramic views of Paris and sip Champagne when they reach the top. The tower also has restaurants, shops, and historical exhibits.

Palace and Park at Versailles

Located in a Parisian suburb, the Palace at Versailles was home to three French kings, Louis XIV, Louis XV, and Louis XVI, as well as Marie Antoinette.

More than three million people visit Versailles annually. The palace features grand rooms with opulent fixtures and finishes, as well as murals and artwork by French artists. Visitors to the park can also view the beautifully laid-out gardens, which feature sculptures and fountains.

Also on the grounds are Marie Antoinette's Estate (La Petite Trianon) and the Grand Trianon, which was built for Louis XIV and his mistress.

Located on an island a half-mile off the northwestern coast of France, Mont Saint-Michel hosts more than three million visitors annually. Mont Saint-Michel is on the UNESCO List of World Heritage Sites, and the island is topped by a beautiful Benedictine abbey honoring the archangel Michael.

Visitors to Mont Saint-Michel can shop and dine, as well as visit museums and the abbey.

Located on the French Rivera, Saint-Tropez is an internationally known costal resort destination. The former fishing village is famous for its long stretches of beaches fronting vivid blue water. It is also the playground of the rich and famous, known for hosting artists like Picasso and actors like Brigitte Bardot.

The beaches at Saint-Tropez can see as many as 100,000 visitors per day in the summer.

With more than two million visitors annually, Chartres Cathedral is located about 50 miles southwest of Paris. The Roman Rite cathedral is an example of medieval French Gothic architecture.

Like it's Parisienne cousin, Notre Dame, Chartres Cathedral is known for its flying buttresses, beautiful stained glass, and its Flamboyant spire.

Built to carry water to Nîmes sometime between 19 BCE and 50 AD, the Pont du Gard is one of the most impressive pieces of Roman engineering still standing. Throughout its history, the Pont du Gard has inspired writers like Jean-Jacques Rousseau and Henry James with the impressiveness in size and engineering.

Located in the South of France in the Languedoc-Roussillon region, the Pont du Gard now attracts around 1.5 million visitors annually. There is a museum for interested visitors, but those who dare to go "off the beaten path" will find a variety of interesting sights waiting for them - with the Pont du Gard being the highlight, of course.

The Chateau de Fontainebleau is located in a commune outside of Paris. More than 300,000 people visit annually.

The palace is famous because because of the French monarchy, who took their leisure there for centuries. It sits on 130 acres of parkland, and the palace itself has more than 1,500 opulently appointed rooms. Visitors can shop, explore museums and chapels, and view spectacular works of art and architecture.

The 19th century ushered in a new era of French artists, most notably the impressionists. For Monet, the gardens at Giverny, which is in northern France, apparently served as his muse and inspiration. Many of his paintings are instantly recognizable scenes from the garden. While there are many notable gardens in France, Monet's gardens at Giverny are by far the most popular-undoubtedly because Monet immortalized them in his paintings.

Visitors can see the garden's two parts: a Japanese-inspired water garden, and a one hectare garden called Clos Normand. The garden is only open seven months out of the year from late March to early November. Approximately 500,000 people visit annually.

France has a range of places for people with an array of tastes and interests. Whether visiting museums, landmarks, cathedrals, palaces, or touring French wine country (pictured), you're sure to find plenty to do in this beautiful country. 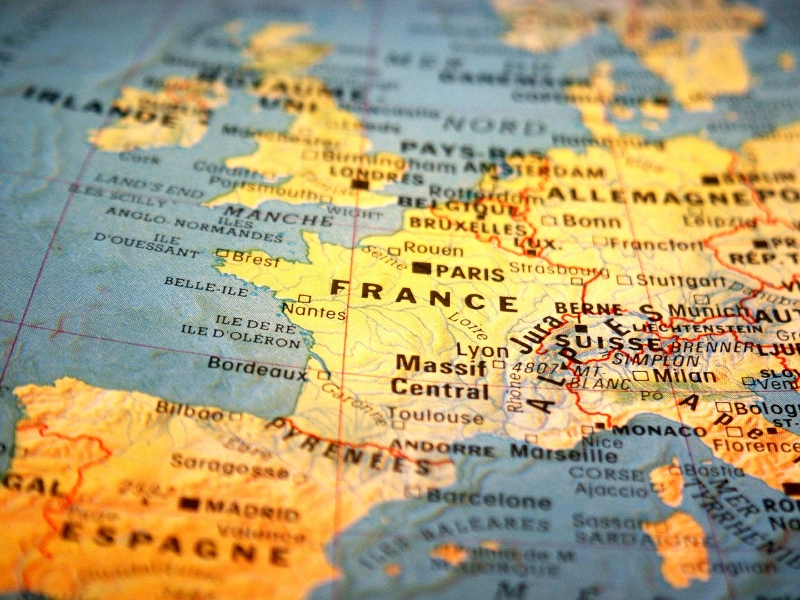 Up Next
Rivers of France
View previous slideshow again